Hi. I recently purchased a well used 1999 414kce which prompted me to sell my beloved 2014 514ce. I prefer the one piece neck and the Fishman stereo on the 414.  I know they are the same size, but the 414 feels a bit smaller, and has a more open transparent sound. Happy,  Mike.

Best thing about it: The beautiful Hawaiin Koa, playability, and tone.

I've always been Taylor Guitar fanatic ever since I got into playing guitar. In my opinion Taylor's are the gold standard for modern acoustic guitars in both looks and overall playability. I also have always preferred their brighter sound over Martins and their ability to cut through the mix. I have personally owned several Taylors over the years, but my favorite by far, is my current go-to acoustic, a 1999 Taylor 414. With that said here's my complete Taylor 414 Review!

Now as I mentioned in the introduction the Taylor 414 that I own was made in 1999. Being a Taylor fanatic it is well-know (obviously a little subjective) that the best era, or "Golden Era" for Taylor Guitars was from 1996 to 2000.

Not to say their guitars built nowadays aren't any good (They are still excellent), but in terms of build and material quality they are without a doubt superior. In a day and age where profit is everything, companies find ways to cut corners and produce a product of equal value for less. The only problem with that is the product is not equal to what it once was with respect to the Taylor Guitar catalog. Don't agree with me, that's fine, but I implore you to try a newer Taylor model that was made after ~2003. Then try an older model, preferably from said "Golden Era". You will hear, feel, and see the difference. Better resonance and sustain, better playability from superior construction, and an overall better look from a better selection of tonewoods with tighter grain lines.

Ok, so that's our little rant about the Taylor Guitar Golden Era. Now back to the Taylor 414 Review. I have broken down this review into tonewood selection, aesthetics, sonic richness, and playability. There are only 2 negative that I have to say about the Taylor 414 from the model year 1999. Both of which are more of a "me" problem, but I figured I share them anyway. Taylor 414 Tonewoods The combination of the select spruce top and the ovangkol back and side is excellent. Both tonewoods have a tight grain pattern and look great, especially in the natural lighting. Ovangkol is described as a relative to rosewood and performs very similar.

In comparison to say, koa, it supposedly has a bit more midrange, but again that is all subjective. At the end of the day I personally prefer the look of rosewood over ovangkol. It's a little darker and fits me better. A close up of ovangkol used for the back and sides The first of the 2 negatives is the fact that the ovangkol is in satin finish. I much rather prefer a nice gloss finish as the spruce top has, but nonetheless it still looks great! Taylor has produced 414's with rosewood back and sides for limited runs in the past, but as of recently they do not make the 414 (no cutaway, pure acoustic - no electronics) anymore. There only factory model offered today comes in the form of the Taylor 414ce-R.

As I mentioned above, I'd rather have the rosewood with the gloss finish than the ovangkol. However, don't let that fool you into thinking I don't like the look of the Taylor 414. The guitar looks amazing! But... The 2nd "issue" I have is the lack of sound hole inlay (personal preference). Taylor guitars, typically the 500 series and up have the sound hole abalone inlay. Limited runs of the 414 typically include the inlay as well. Taylor 414ce Limited Edition Model with soundhole inlay. In my opinion this aesthetic feature really makes Taylor Guitars stand out in terms of their overall look. Really makes them complete, giving them that high-end, wow-factor look on-stage as well as in natural light. Taylor 414 Body Shape The Taylor 414 is Taylor's renowned Grand Auditorium Body Style. My personal favorite of any body shape of guitars. The grand auditorium sits in between that of a concert size (Taylor 412) acoustic and a dreadnought. Not too big, such that it is comfortable to play in any scene both finger-style and strumming. Not to small, such that you lose any sonic abilities because there is not as big of cavity as a jumbo (i.e. Taylor Grand Orchestra) or dreadnought (i.e. Taylor 410).

How does it sound? Disclaimer: Sound and tone with a guitar always subjective. In terms of projection the Taylor 414 is top notch. The 20-year-old Sitka spruce has aged perfectly and has opened up very nicely. Now granted if you buy a newer model its sound as "opened-up" as the model I'm playing, but they still have that awesome crisp sound and playability. I often just hit a chord and see how long it will ring for. There is a ton of awesome overtones as well which bring an added element to your playing.

The 414 has a ton of that signature Taylor brightness to go along with a balanced crisp attack all the way up and down the ebony fretboard. I can't say enough about how great this guitar sounds. Individual notes are clear as day while chords are loud and resonate perfectly throughout the room. The minute I picked this guitar up off the used wall at a local guitar store I knew I was going to buy it (took me 3 days to decide it was time for another guitar before I pulled the trigger).

Taylor are the most playable acoustic guitars on the market. Their necks are as comfortable as it gets. The 414 has a solid tropical mahogany neck in satin finish that is smooth and fast. This is the key to why it is so playable. Comfortable neck shape and a fast satin finish. Now some players like gloss finish necks to get that grip when grabbing chords. You will see this on some Martin models. I much prefer the satin finish necks, especially the ones from the "golden era" and higher-end models. Prior to my purchase of the 414 I had a Taylor 214ce-DLX and the difference in material quality is very apparent. The 214ce-DLX felt excellent until I picked up the 414. I immediately felt the difference declared the 414 far superior. Tuners The '99 414 has Grover tuning machines (Taylor stopped using grovers circa 2003) rather than the Taylor brand tuners. Grover look better and perform better in my opinion.

The 414 (no cutaway) is not offered anymore. You will probably have to special order a 414 to get one without electronics. So the only model that you can get comparable to the 1999 model I have is the 414ce. The Taylor 414 is truly a professional acoustic instrument. If you are looking to take you playing to the next-level you cannot go wrong with the 414. Studio, Gig, bedroom, doesn't matter the 414 can handle it all.

Best thing about it: Extroadinary Craftsmanship and Amazing Tone!

Hey buddy! Know anything about Taylor 414 Acoustic 1999?
Submit your own super-short review, it´s easier than eating a donut. 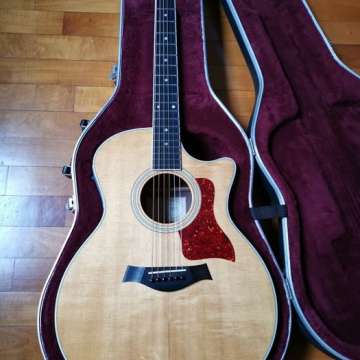