I've had a Concert 2 for 25 years.  Like everyone else has said, the clean side is classic Fender, as good as an amp can be.  The overdrive side is good, too, I guess.  I never use it, never need it.  I wish the two channels could be separate like old Fenders, but overall it is a wonderful amp.

Best thing about it: sustain for days

I have an ‘83 1x12 combo. Like others I find the gain channel pretty unusable but the clean channel is just fabulous. Reverb tank is typical lush fender reverb and man this thing is LOUD! Anyone wanna buy it?

Best thing about it: Clean channel and reverb

I got mine a couple of weeks ago. This thing is loud loud. I don't know what the fuss is about channel 2. I think it sounds awesome...and did I say LOUD. I'm gonna connect the send & receive on the back and experiment some.


Best thing about it: Excellent sound & built like a tank.

Fender Concert, sometimes refered to as Concert 2 or “Rivera era Concert”, is an all tube point to point wired combo amplifier with 60 watts of sparkling clean Fender power. Mine is a 1×12 combo model but other configurations such as 2×10, 4×10 and a head also exist. This two channel amp was designed by Paul Rivera during his period with Fender. These amps were produced between 1982 and 1987.I find the distortion channel mostly unusable for my purposes and therefore rely on pedals for dirt and stick to the clean channel that has plenty of delightful clean headroom that Fenders are known of to play with. The amp is very loud and also very heavy so carrying this thing to gigs will also give you a good workout on the side.This amp is slowly approaching proper vintage status so the prices on used instrument market have been on the rise.

The clean channel sound is just what you’d expect of an old Fender, sparkling clean lushious tones. The distortion channel for me doesn’t quite fit the bill. I’ve used it before but for many years now I’ve been a happy user of pedals through the clean channel when it comes to playing crunch, which is what I mostly play anyways.Clean channel settings include volume (pull for clean), bass, treble, reverb and presence. Distortion channel includes two gain stages (volume, gain) before a master volume so there’s plenty to fiddle around with…. maybe I just haven’t found the right setting for dirt with the amp itself.

Built like a tank is a phrase often used about stuff like this amp… so I guess that’s what it is. I would say that it’s very dependable and it has served me as a workhorse amp through past 25 odd years so far. Would and do gig with it.

Hey buddy! Know anything about Fender Concert 2?
Submit your own super-short review, it´s easier than eating a donut. 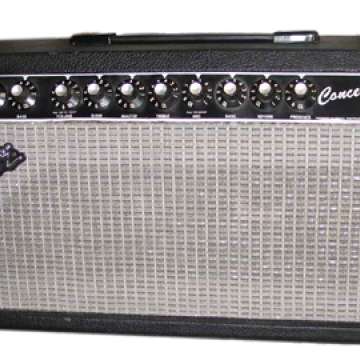