Classic key to Nirvana sound, but after many years the buzzing sound started to annoy. One simple mod - soldering diodes D4 and D5 off the circuit - turned the pedal to much more useable. Now there's no gain drop and fizz turned into nice fuzziness. Now it's my favourite distortion pedal.

Best thing about it: Cheap, you can find it everywhere if have lost yours.

This pedal from Boss has been around since 1978 and it has kept its popularity through the years and passing musical trends.  It was actually the favorite distortion pedal for guys as diverse as Kurt Cobain and Steve Vai.  I believe also Joe Satriani uses this pedal still.  I have to admit, I bought it because it was a legendary pedal and I wanted to try it out.   If I would have tested this pedal in store, I probably had left it dusting in the shelf.  The initial sounds you get from this orange box are pretty horrendous – in a bad way.  I am not sure what Cobain did to get his distortion sound with this pedal, he probably was a pretty good pedal+amp tweaker.    Just don´t expect to sound like those guys when you first plug in to this box.

It is simple box with tone, gain and volume settings.  When I first picked this pedal up my first reactions were “Oh my god, this pedal sucks”.   The sound with low gain settings and 12 o´clock tone is totally weak and missing the balls (both of ´em) and with maximum gain settings it sounds just harsh and trebly. But not fortunately in a good way (say like harsh sounds on Nirvana records).     After messing around a bit I learned that you have to be really careful with the tone setting,  with nine o´clock setting the trebly harshness smooths out and you get almost usable sounds from this box.I would be very interested to hear comments what kind of settings Vai, Satriani, Cobain etc used with this box? Maybe they had a good nice amp distortion going on too and just used DS-1 to boost the things lil´ bit over the top.   For what it is without amp support,  I don´t like this pedal very much.

The best part of this pedal that it is made of steel and you can´t break it with driving a M4 Sherman tank over it (haven´t tried that yet though).  The construction feels like it would last a nuclear blast and for gigs it is as dependable as you can get.     Only if it would sound good…

Hey buddy! Know anything about Boss DS-1 Distortion?
Submit your own super-short review, it´s easier than eating a donut. 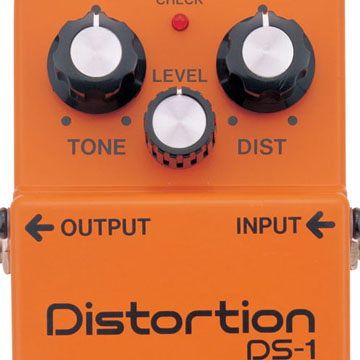