This yellow overdrive pedal is considered a classic among many guitarists. It was originally released in 1981 and it still popular, no doubt thanks to many famous players using it like Zakk Wylde.This pedal is pure overdrive, probably best use for it is driving decent tube amp to distortion. On it´s own it sounds kind of thin, I don´t think many people use it with clean amp at all.   I use it front of Marshall all-tube amp and it works great as a booster for little bit more gain – works well with soloing also.  The pedal is dead-simple, just the pure essentials: volume, gain and tone.   The simplicity is probably my favorite feature of it, you don´t get lost with messing around the controls.

On its on, it sounds like garbage. On front of good tube amp, with the purpose of overdriving the pre-amp stages to oblivion it sounds great.   With overdrive pedals you must know what you´re doing,  if you require pedal which produces distorted sound to use with clean amp, look elsewhere (distortion pedals).  My rating is about using this as a tube amp boost.  It is pretty transparent as a booster and on low-gain settings the effect is similar to using really high-output pickups on your guitar.   My favourite setting is to set gain minimum, tone twelve o´clock high and crank the volume.

The cliche holds true, it is built like a tank.  Boss pedals have metal case which lasts whatever punk-gig you might ever imagine.  Of course the knobs might twist, but the pedal is nearly indestructible.   Like all my Boss pedals, the build quality is flawless.

Hey buddy! Know anything about Boss SD-1 Super Overdrive?
Submit your own super-short review, it´s easier than eating a donut. 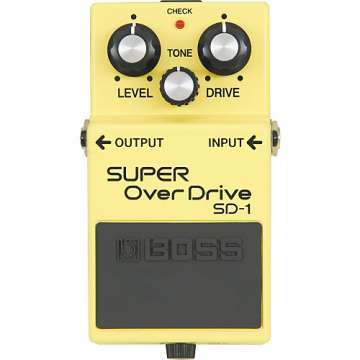