I own a b.c.rich mockingbird special like you made in china ,I was lucky I've had no problems with Finnish or electric's.ive owned many guitars,Gibson, Fender, hofner,etc etc .mines a keeper short scale so no famous neck dive .As always good and bad in all manufacturing companies.hence the lemon term when you buy a bad car. like I said I was lucky .I also own the acoustic version which is awesome to

Best thing about it: Playability is unbelievable

Some of my friends asked me about my negative reaction to B.C. Rich Guitars, despite they saw me playing a B.C.Rich Mockingbird Special. So here is my short review.

I bought my Mockingbird Special in 2011 from official Russian dealer (Slami) in Moscow. Despite most of them were made in Korea, I was “lucky” enough to get a Chinese one. I wasn't an experienced guitar player at that moment; I always wanted to have this white Mockingbird, and, to be honest, I was a blinded by its look, and believed it was a good choice. After returning home (I lived too far from Moscow) I was completely disappointed by its multiple issues and overall quality:

1) I found out that one of 4 pots holes was broken during the manufacturing process. Chinese manufacturers cut too much wood from inside, so thin (about 1mm) wood around volume pot was simply crushed into pieces. But they simply left it as is, without fixing the problem.

2) There were finish defects. The deepenings where the pots and switch were installed were not finished well, so they filled them with some kind of white paint that didn't match the overall finish and looked more like white correction fluid. Different, unpolished and completely ugly.

3) Frets buzzed as hell and there was no way to fix them by bridge or neck tuning, they were simply bad installed, not playable at all. Frets and broken pot perforation were fixed by a local guitar service.

4) Sound. Aggressive, specific and non-versatile. The bridge pickup by Rockfield is one of the worst pickups I ever tried, even noname humbuckers usually sound better. After pickup change the guitar sounds kind of good, but it still has very aggressive attack + lack of sustain - not what you would expect from a neck-through guitar. As a whole, I made this guitar playable and I sometimes I use it for studio recordings.

5) My luthier informed me that there was a layer of black paint under the white finish. It seems like manufacturers had to paint it twice because they painted it black by a mistake - black and white models had different bindings and this guitar was supposed to be white.

6) Defective headstock. I thought it was a twisted neck - no, neck is playable, but the headstock looks assimetrically tilted.

My overall impression. I liked the hardware – TonePros bridge and Grover tuners work well. Wood quality is OK too - nothing bad happened since I bought it. Now it's playable and sounds OK, just because I fixed a ton of QC issues. So I think, even random Aliexpress guitar could be a better choice. To me it still looks and feels like a bad copy of something cool - not a serious, "Special" instrument. It also doesn't look like a well-known Korean version, so I absolutely can't sell it.

By the way, it wasn't a B-stock guitar. I paid about $700 for it and it looks like the manufacturer simply stole a significant part of that money.

In addition, I think I had to post this because I contacted B.C. Rich earlier and they simply ignored my problem.

All these problems get on my nerves all the time. I don't like such negative stuff so I didn't write this for a long time, but I want future buyers to know this. I still love B.C.Rich designs, but I definitely wouldn't buy a new one ever again due to this sad experience.

Thanks to everyone who can read this to the end, I hope it will help someone to make right choice.

Best thing about it: It looks good, for those who don't play guitar

Hey buddy! Know anything about B.C.Rich Mockingbird Special?
Submit your own super-short review, it´s easier than eating a donut. 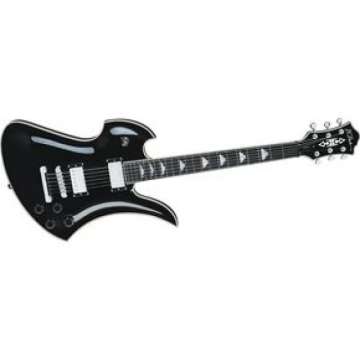