This guitar is a US-made Fender Stratocaster with humbucker on bridge with some added little features (hence Deluxe).  There is locked tuners (very nice) and S-1 switch which makes it possible to use different kind of pickup selection combinations (for example neck and middle single-coils together or even all pickups at the same time).This is my second new american Stratocaster and both have had some little flaws in finish. First one had a visible dent and one fret was too low,  this second one is otherwise perfect but the second tone knob is labeled as “volume”.  Later is just a visual flaw, but makes you wonder how these pass the final inspections and is the “US-made” quality something from the past.   Luckily the guitar is otherwise fine and is a good choice for all kinds of rock-oriented music.

Stratocaster with humbucker is basically Eddie Van Halen – invention and it is a really good weapon for heavier rock-music where the power of the humbucker gets to shine.  Neck and middle pickups are single-coils (dubbed Noiseless by Fender) and they deliver more traditional Strat-sounds like heard for example in the Jimi Hendrix- songs.  These single-coils are pretty much noiseless as the name says, maybe because of that they maybe don´t sound just as trebly as the sound of traditional single-coil pickup.    I like the option to use S-1 switch to boost the output of the neck single-coil, you get a bit more sustain when playing leads that way.   Bridge humbucker is powerful enough to play metal if you have a amp which delivers, but this guitar is very much suitable for any kinds of music styles. If you play something really light, without distortion at all, I would suggest getting a Start with single-coil in the bridge,  humbucker always sounds a bit darker with the clean sounds.

There were some issues with the build quality like I mentioned previously.  The guitar is otherwise very dependable and robust. Stratocasters handle droppings very good and gigging is not a problem. Of course you probably need a backup guitar at gigs, because floating Fender tremolo gets out-of-tune if a string snaps.

Hey buddy! Know anything about Fender Deluxe Stratocaster HSS?
Submit your own super-short review, it´s easier than eating a donut. 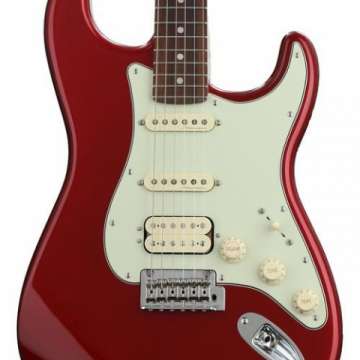