This guitar is a re-issue of Gibson 1968 model, with mahogany body coated with thick lacquer, rosewood fretboard and two humbucker pickups (Gibson 496R on neck and Gibson 500T on bridge).   It is a great rock´n´roll guitar and I don´t see why you could not use in other styles too – players as diverse as Albert King and Michael Schenker are famous for playing Gibson Flying-V.  Flying-V model might not be for everybody as the body shape feels very different than most, for example playing while sitting down might be hard for some people. (Million dollar hint for this: Put the lower V-horn between your legs)I really like the good reach of the lower frets and the guitar is pretty light too (at least compared to Les Paul).  Lacquered 22-fret neck is pretty narrow, but not a toothpick like some Super-Strat neck – it still feels pretty hefty.  As this guitar is a re-issue, it has one feature from 1968 I don´t like so much: the knobs are slick and very slippery when sweating up at a live gig.   The bridge is the standard good old Gibson Tune-o-Matic which gives you options to set intonation of every string and adjust the angle of the strings from the tailpiece.  There is three knobs: 2 volumes and tone.  The layout of the knobs required some time to get used to as the tone knob is the highest one – I was used to Fender-style setting with the bridge volume as the highest one.Bonus feature: Flying-V is one of the sexiest guitars you can have on stage

Gibson 500T pickup on the bridge is kind of harsh sounding, I actually swapped it to Seymour Duncan ´59 pickup which to me is much better and gives better dynamics.  The original pickup might be fine for heavy metal though.  Gibson 496R pickup on neck is fine, it is not very hot, but you get decent amount of sustain from it for lead playing.  You can play every kind of music with this guitar, but as this guitar is Gibson with humbuckers you probably get country twang easier from somewhere else.  For rock, this guitar is perfect.  This guitar is surprisingly loud unplugged and the body resonates nicely.

Quality was otherwise fine, but the nut did not keep high E-string in place at the beginning.  The guitar was shipped to Gibson´s authorised repair shop and they fixed it for good.    It has served me good since.     To quote Forrest Gump: And that´s all I have say about that

Hey buddy! Know anything about Gibson Flying-V 68?
Submit your own super-short review, it´s easier than eating a donut. 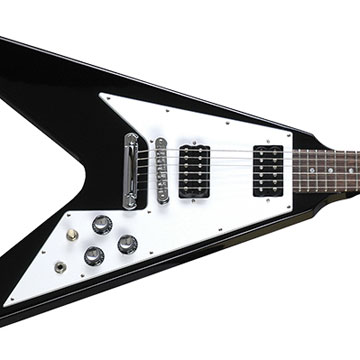