I bought one new in 2013. It has been a great guitar for me. I have really played the hell out it. I keep it well maintained with proper care and lots of TLC. And I am rewarded, every time That I plug in. It feels comfortable. Just like home or an old friend.

Best thing about it: plug into my Friedman and rock on!

This is the first Gibson Les Paul I have owned. I´ve had couple of Les Paul copies before and for maybe 15 years I´ve been planning to get “real one” some day. So the expectations were really high and I am happy to say the expectations were met. Even though to be honest the modern “non-Gibson” Les Pauls have probably better price-quality ratio,  Gibson Les Pauls are that expensive.

2013 Standard has modern type weight-relief and some visually hidden specialities like coil-splitting, asymmetrical neck profile and out-of-phase switch (all toggled by pulling the volume/tone knobs), but nevertheless this guitar feels very much a classic Les Paul Standard.  No Robo-tuners and ugly headstock Les Paul – signature like they added the following year.

My only criticism about this guitar is the price, there is some Gibson-added cost on the Standard.

Guitar has classic Les Paul – sound, which gives you smooth lead sounds with neck-pickup and powerful rhythm on the bridge pickup. There is nice sustain of course, which is one of the main attractions of the heavy Les Paul – type body and neck.  Pickups are Gibson BurstBucker Pro´s, which have good balance between classic PAF and little bit more high output models.  If you are interested in getting multiple kind of sounds from Les Paul, this guitar delivers. There is possibility to split the pickup coil on each of the microphones (single-coil sound from LP does not naturally match Stratocaster twang), you can put pickups out of phase and there is even possibility to bypass all the tone and volume knobs, which gives the you the highest possible output with a pull of a knob.  This feature is pretty handy if you use volume pots to manage your sound from clean to dirt – you can just pull the knob and you´ re in the overdrive zone immediately.

I am using this guitar with pretty much standard setup with Marshall – tube amp and some stomp boxes.  This setup gives you the classic sound you can imagine, in the veins of Slash and Jimmy Page.     Woman tone, ahhh.

Quality was really good, nothing to complain about, just as you would expect from a guitar which costs over 2000 euros.  Setup and string action is of course personal thing,  this thing shipped with set of ´10 strings and that is the gauge I am using anyways.  There was a Gibson hard guitar-case with it and a set of tools to setup neck relief and bridge height.      It is as much dependable as good Les Paul guitar is,    with LP´s you can break the neck from the nut easily if dropped on a certain angle (because of the angle on the headstock).  I would gig with it, and actually I have already.

Hey buddy! Know anything about Gibson Les Paul Standard 2013?
Submit your own super-short review, it´s easier than eating a donut. 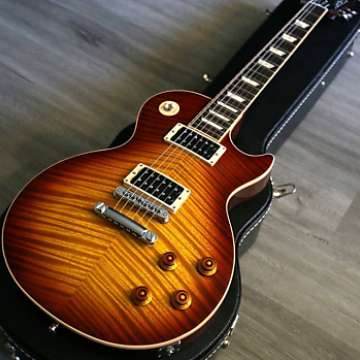