This is a virtual guitar rig app modeling the gear Slash was using around 2012.  App is developed by Amplitube and it sounds very similar to other iOS guitar rigs they are offering.   Slash for iPad is based on 6 different virtual stompboxes (typical chorus, overdrive, delay etc) and a Marshall-type virtual head.   The user interface is logical to operate if you are used in real-life stompboxes – even though the stompboxes don´t really have a dynamic feel to them – this is digital consumer audio software after all.    There is also tools like tuner and a single track recorder built-in.  You can expand the recorder for “full recording suite” if you get it via in-app purchases,  but I am not sure it makes any sense. You probably should get a Reaper DAW or similar for your computer instead if you are serious about multitracking – even iPad´s Garageband is probably better choice.  This app is nice entertainment for a guitar fanatic or Slash fan – but I have not bothered to use it after couple of times.  There are better options for iOS virtual guitar amp.  Get a trial version before you buy, even thought the price is pretty low (you can get it for a tenner).

Here is my main gripe about the app:  the sounds are not very good.  They emulate raw Marshall – sound Slash´s amps produce but it does not really work while playing through headphones or audio system.  Sounds you get range from thin to harsh and really plugin-like,  you can never achieve the “woman tone” Slash is known for in his lead work.  You might get a decent rock rhythm sounds from it, but even Slash himself does not sound very impressive playing through this (check the YouTube clip attached).   And this comes from huge Slash – fan   I haven´t tried to connect this app to a real guitar amp.Effects are wacky to the point of being laughable – there is even virtual wah. To be honest they all sound pretty bad and tweaking around them is amusing for maybe five minutes.   You probably get the best sounds from the app using the Marshall head with gains maxed.Bottom line: Any Line6 POD device or similar modeling system beats the shit of this app.

App is developed by established audio software company. The app won´t probably crash but I would not go gig with it with some serious backup plan

Hey buddy! Know anything about AmpliTube Slash for iPad?
Submit your own super-short review, it´s easier than eating a donut. 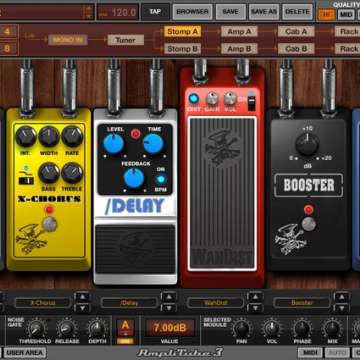